Flags of the World

Turkmenistan is the most enigmatic of the Central Asian nations known collectively as ’The Stans’.

Thus it seems fitting that the Turkmenistan flag is the most elaborate, and the most difficult to sketch accurately freehand for sure! 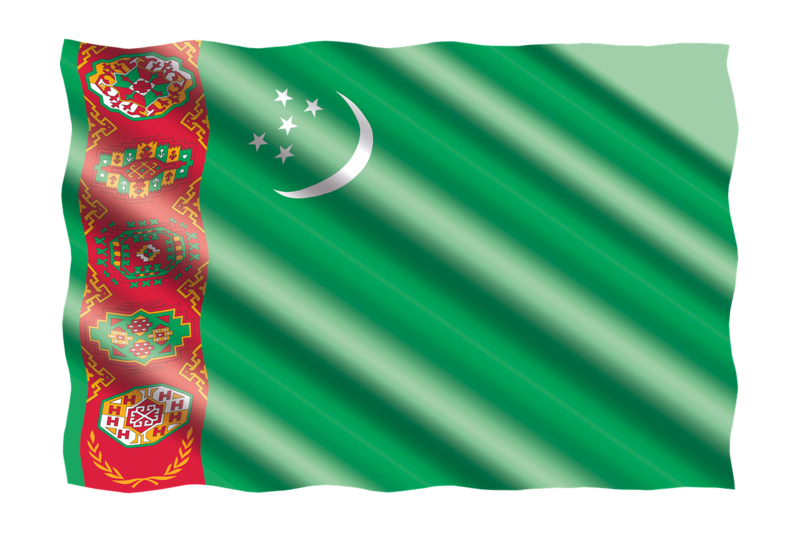 History of the Turkmenistan Flag

As with the other former Soviet states, Turkmenistan once had its own local variant of the USSR flag (the basic red flag with hammer and sickle along with two bars of blue running horizontally through the middle.

Not a particularly pretty design.

Shortly after independence, a new national Turkmenistan flag was adopted.

The flag of Turkmenistan was then slightly altered and updated in 2001 to the version of the Turkmenistan flag we know and love today.

Symbolism of the Turkmenistan Flag

Those who design flags love symbolism.

The Turkmenistan flag is loaded with it.

The green background that makes up the majority of the Turkmenistan flag is the colour associated with Islam.

Even though Turkmenistan is a constitutionally secular country with more religious diversity than most people expect, the majority are Muslim in theory if not in everyday religious practice.

Green is also a colour traditionally associated with the Turkmen people through history, even their pre-Islamic history.

The religious element of this could be overstated; green covers Turkmenistan is the spiritual and secular world equally.

The Crescent moon is another recognizably Islamic symbol.

It is paired with five stars, representing the five provinces of the country and the tribes with whom they are most associated.

There are a multitude of tribes and sub-tribes in Turkmenistan, but five of them are considered the major ones.

This is something that is now more or less formalised with the naming of the regions as well as the use of the traditional gul (a pattern used on carpets) of each of these tribes on the hoist-side bar of the flag (the part that is tricky to draw accurately!).

Top to bottom, these are Teke (the major tribe of the country), Youmt, Saryk, Chowdur, and Arsary.

Sitting below these gul is an olive branch.

This is a more recent addition to the flag of Turkmenistan marking the official status of permanent neutrality which was accepted by the UN on December 12th 1995.

This is a day which has since been celebrated in Turkmenistan; neutrality being seen as one of the crucial legacy achievements of the first President; Saparmurat Turkmenbashi Niyazov; the honorific ‘Turkmenbashi’ meaning ‘Leader of all Turkmens’).

Where to Find the Turkmenistan Flag

Pretty much everywhere in Turkmenistan!

The Turkmenistan flag flies from every government building, can found on sports clothes and schoolbooks...

The carpet guls on the flag can be found on traditional woollen carpets from all regions, and each contains their own meaning and symbolism in their design (to be explained in another travel guide one day, or visit for yourself to learn on the spot!).

Outside Ashgabat’s National Museum stands a flagpole once considered the world’s tallest freestanding one, flying an enormous national flag that can be seen across the city on a clear day.

The best place to see the Turkmenistan flag though is of course in Turkmenistan, a visit is highly recommended!