A strong urge to have an automotive car-making industry led at the end of the 1990s to an interesting joint-venture between the North Korean state, represented by the ‘Ryongbong Company’ and the South Korean ‘Unification Church’ of Reverend Sun Myung Moon (known colloquially as ‘the Moonies’), represented by the ‘Tongil Group’.

Rev. Moon, born in North Korea in 1920, founded the ‘Holy Spirit Association for the Unification of World Christianity’ in 1954. Moon visited Kim Il Sung in 1991 and they got along well, despite Moon’s anti-communism, they found common ground in a passion for Korean reunification. 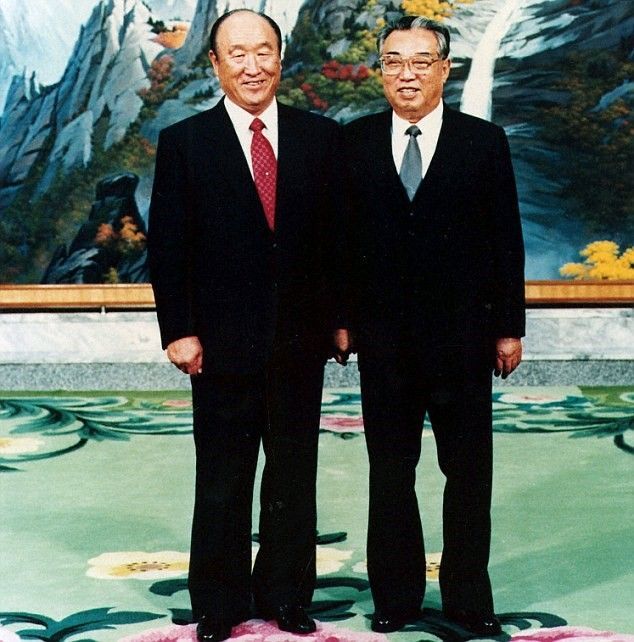 The joint-venture was made after the example of the Chinese joint-ventures: the foreign partner comes with the money and the technology, the local partner supplies the facility, the workers and the distribution area.

Moon’s church funded the deal with a 54 million dollar investment. They got (via ‘Pyeonghwa Motors Seoul’) 70%, the North Koreans (via Ryongbong) 30% of the joint-venture. The Mekong Auto Corporation in Vietnam, connected to the Church, had good relations with Italian carmaker Fiat and via this connection the joint-venture received Fiat model cars to assemble. Additionally, the Church had good contacts with car companies in Northern China, with Brilliance in Shenyang and Shuguang in the China/DPRK border city Dandong.

The North Koreans came with a factory site in Nampo (South Pyongan province) near the Youth Hero Highway to Pyongyang. Initial drawings show plans for 11 big halls and one small one. Until today only one big hall has been built together with the smaller one.

The number of workers at the factory has varied from 200 to 350.

The first car to be made was the Italian Fiat Siena, a car which was part of a project “Fiat 178 world car” - Fiat’s attempt to produce a car worldwide. The first North Korean Sienas were assembled from ‘SKD’ parts (meaning Semi Knocked Down, the cars are partly ready, only some parts have to be assembled) and production started on April 20, 2002. In 2003 the factory could handle CKD assembly (Complete Knocked Down, all the parts are imported in crates).

The factory and company name was a logical one: Pyeonghwa (Meaning: Peace). The logo shows two doves of peace. (note: this word would be transliterated in North Korean style as ‘Pyonghwa’ but almost always the Southern-style ‘Pyeonghwa’ is instead used)

Four names were chosen for the different kind of automobiles: Hwiparam (Whistle) for low and medium class cars, Zunma (Steed) for the luxury sedans, Ppeokkugi (Cuckoo) for the SUVs, off-road, and light commercial vehicles, and Samchonri (3000-ri, a term of distance referring to the length of Korea) for the minibuses. 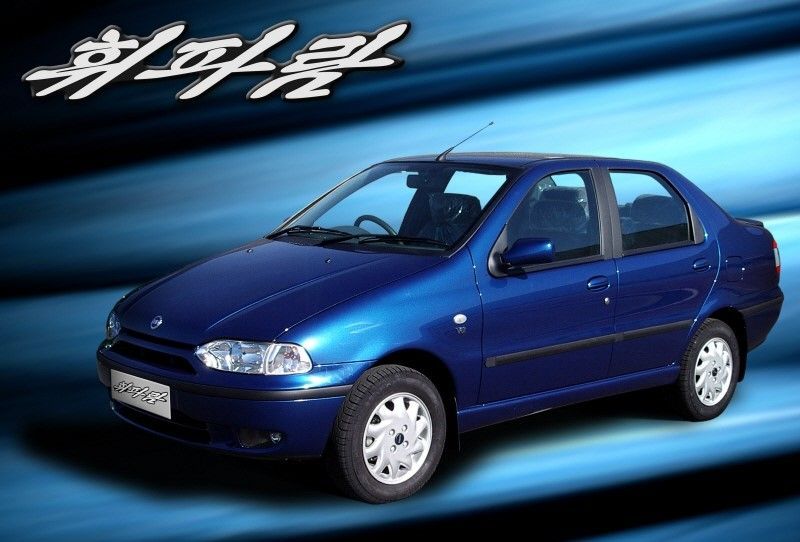 So, the name for the Siena was Whistle - in Korean Hwiparam (alternatively transliterated as Hwipharam, Fiparam, Hweepaaram, or Hviparam). The Siena was the Hwiparam I. The car was a small sedan with a trunk, 4.10m in length, a four-seater, available with a 1.2lt or 1.6lt petrol engine. Production of the Hwiparam I ended in 2006. A good guess is that about 500 were assembled.

In August 2003 a second Fiat model was introduced, the small van Fiat Doblo. This car was named the Ppeokkugi I. The Doblo had a short life and was less successful than the Siena. After some production in 2003 and 2004 this model disappeared from the production line.

Fiat products were quite expensive to produce and not very profitable. Thanks to their contacts in Dandong the Moonie Church came up with the SUV and pickup models of a Chinese company called Shuguang (later Huanghai). The advantage of these products was that a modest export to Vietnam was possible, where they were sold by the Mekong Company, another Church connection. 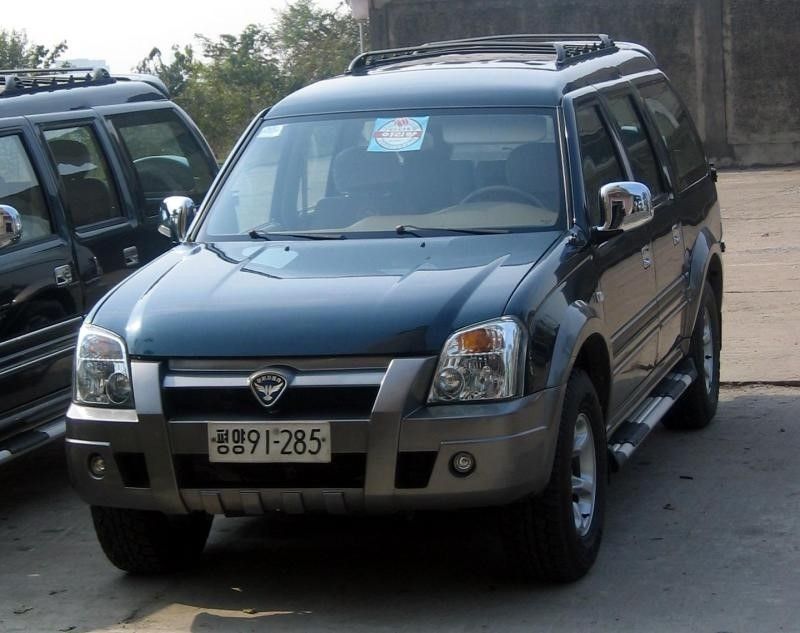 In March 2004 the first of these Shuguang products came off the line in Nampo: a 5 meter long 4x2 SUV. It was named Ppeokkugi II, in Vietnam it was sold under the name Pyonghwa Premio. Assembly ended in 2006. In April 2004 the Ppeokkugi III followed: a double cab pickup based on the SUV. In Vietnam, this five-seater pickup was available with a hardtop. In the same year a 4.7 meter four wheel drive SUV was also assembled, named Ppeokkugi 4WD. Mekong Auto sold it as Pyonghwa Pronto 4x4. Production ended in 2007, but in 2009 a refreshed version appeared.

Less successful was an attempt to attract the business of the higher North Korean authorities with the assembly of the luxury South Korean sedan Ssanyong Chairman. The North Korean government is well known for using Mercedes Benz cars and the Ssanyong Chairman was a local version of the Mercedes E-class (W124). But it is not the real thing! The car was named Zunma (also transcribed as Junma, meaning Steed in English) and a small number were assembled in 2005/2006. 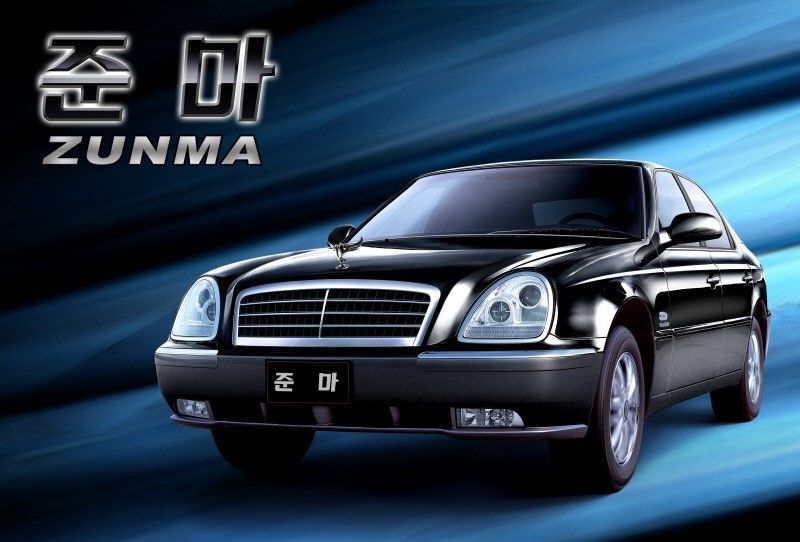 More important was the Hwiparam II, introduced in April 2007. The Unification Church made contacts with Brilliance/Jinbei company in Shenyang, China and the first product of this cooperation was the assembly of the Brilliance Junjie, named Brilliance BS4 for export. The 4.6 meter long sedan, equipped with 1.8 petrol engine was sold as Hwiparam II within North Korea.
A smaller version was assembled from 2010, named Hwiparam III (later Hwiparam 1405). This was the Brilliance FSV (BS2).  This vehicle’s five-seat sedan was designed by the Italian company Italdesign Giugiaro and they can often be seen used as taxis in Pyongyang.

From 2005 Pyeonghwa assembled the Jinbei minibus. In fact it was a Jinbei-licensed produced Toyota Hi-Ace (4th generation). Pyeonghwa named the nine-seat minibus Samchonri (also transliterated as Samcholri, Samchulri). These can be found in many places across the DPRK, a very widely used model. 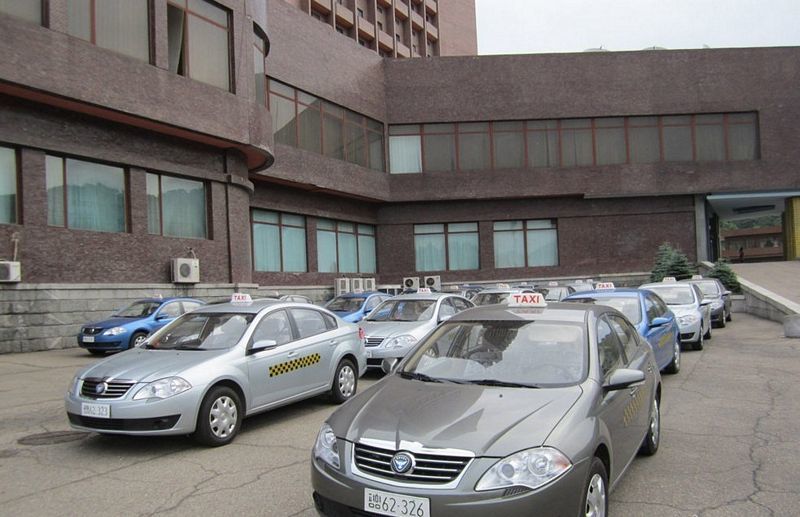 Whether for economic reasons or due to political pressure from a more conservative regime in South Korea the Moonies decided to get out of the deal and divest themselves of Pyeonghwa Motors, at first the selling price they wanted was 200 million dollars, but finding no buyer, the Church decided in December 2012 to donate their share of the business to the North Korean government, in exchange for potential contracts in the hotel business.

The story of Pyeonghwa Motors will continue in Part 2 of this very special guest blog!