The Tomb of Rudaki

Found nestled in the foothills of the mightly fan mountains in the northwestern corner of Tajikistan is the Tomb of Rudaki.

Rudaki is the man known as the father of Persian literature.

Rudaki is honoured throughout the Persian speaking world and is one of the significant historical figures of post-Soviet Tajikistan. Actively figuring into the national identity as a symbol of not just artistic achievement but also as a cultural touchstone for modern Tajiks.

Rudaki, born Abu' Abdollah Ja'far ibn Mohammed, to an impoverished family, was to go on to become a legend of his time.  Rudaki was to serve the Samanid ruler Nasr II as a court poet in the mighty city of Bukhara eventually losing favour in 937. Rudaki wad to returned to his hometown, where he lived out the rest of his life in poverty until his eventual death 941.

Rudaki was also said to be a great singer and musician, in more recent times he has been portrayed in cinema as a kind of poet/action hero. In Tajikistan's capital Dushanbe, it is difficult not to find anything named after Rudaki from the main avenue, sizeable central park, libraries, schools and museums. There is also an impressive statue in his honour.

More on who is Rudaki

Despite all of the pomp and ceremony attached to the name Rudaki, the tomb has an authentic feel about it. A visit here offers up a pleasant air and sanctity its remote location framed by the beautiful fan mountains. Located within manicured gardens and surrounded by a surprising number of rose bushes, the tomb is a simple yet elegant affair.

One enters the compound through gates over which is written some of the poets most famous words, "There is no greater joy in this world/ Than seeing the faces of friends."

As you approach the tomb, it is easy to become distracted by the many flowers or the surrounding mountains, but on nearing this green-domed sharp brick-built structure, the intricacy of the carving on the doors becomes clear.

Once inside the mausoleum, the visitor is met with pristine white walls, at times almost glowing as the sun shines through inlets at the top of the shrine, Rudakis resting place marked by a clean-cut marble slab. Written above are Rudaki's words "Those who do not learn from the experience will learn nothing from a teacher," in Persian of course.

Also within the grounds of the tomb, there is a small museum displaying artefacts from Rudaki's life and Sughd region.

There is also a small library on site which houses some books containing the works of Rudaki and other various Persian poets. It has been estimated that Rudaki produced many thousands of poems in his lifetime unfortunately now less than a thousand are in existence.

Getting to the Tomb of Rudaki

Around 5 hours drive from Dushanbe or a 30-minute journey from Panjikent. If coming from Dushanbe, there is a turning to the left just before the village of Shurcha.

It is best accessible from Panjakent using taxi or marshrutka. The road from Dushanbe to Panijikent is a pleasant asphalt affair regularly maintained and looked after. However, shortly after turning off towards the tomb and the village of Panjrud the way deteriorates into broken asphalt and gravel, making a bumpy and challenging journey.

Our recommendation is to visit with a tour or guide as the tomb can be a little tricky to find. It is worth the visit if you do have time. The village of Panjrud is one of those places that villagers will still stop and stare at the sight of a western face. 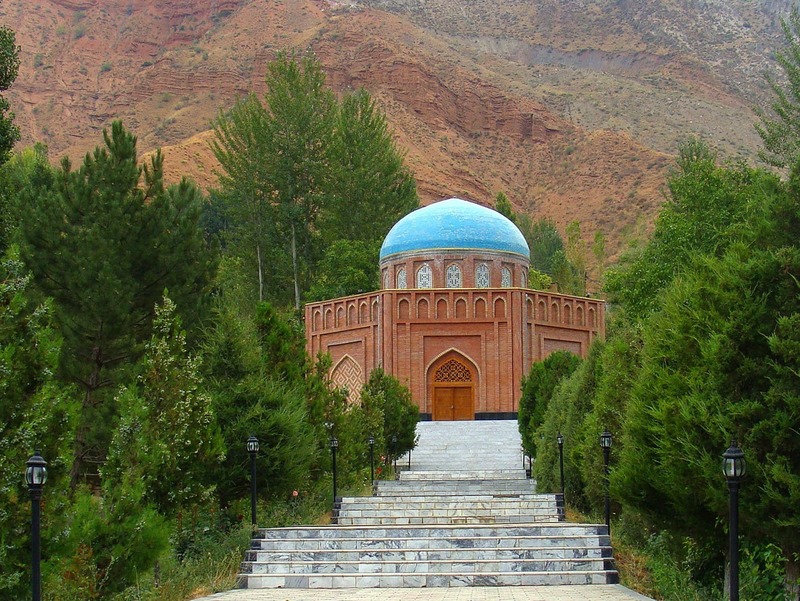