Bayan-Ölgii province located in the extreme West of Mongolia borders the People’s Republic of China to the South and Russia to west and north.

Bayan-Ölgii is renown amongst travellers as being a land of high mountains crystal lakes and rugged glaciers. Bayan-Ölgii is inhabited by the Kazakh, Durvud, Uriankhai, Tuva, Khalkha peoples although Kazah is the most significant number of inhabitants 93%.

The Kazakhs have a slightly different culture to their Mongol cousins, herding yaks and goats while being famed for training and hunting with eagles. 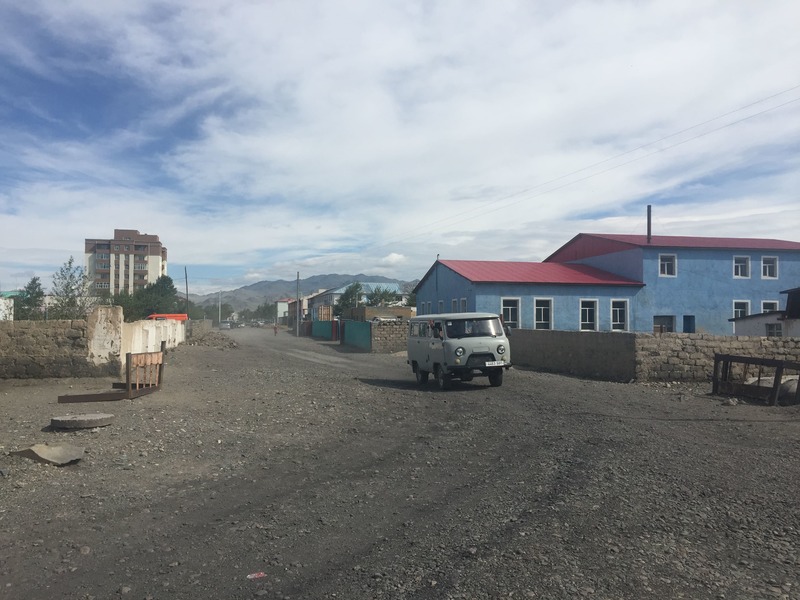 Kazakhs have been travelling this region of Mongolia for hundreds of years.

Kazakhs follow a nomadic lifestyle similar to that of the Mongols. The numbers of Kazakhs grew in Bayan-Ölgii as the Russian Empire expanded.

The most significant growth occurred after the 1917 Russian Revolution and the rise of communism in China before this Ölgii was a small village which rapidly grew into the capital of Bayan-Ölgii province.

Bayan-Ölgii did not escape the religious purges of the 1930s with many mosques destroyed and imams put to death. Mongolians also tried to suppress the Kazakh language and culture.

In 1939, Bayan-Ölgii province was formed allowing the Kazakhs here to be officially part of Mongolia. When Mongolia gained its independence in 1991 around 80,000 Kazakhs, choose to return to their native Kazakhstan. Many later returned to Bayan-Ölgii to pick up where they left off.

What to see in Bayan-Ölgii Province

For many visitors to Bayan-Ölgii, these are one of the highlights on everyone’s list. In reality, they are local Kazakh men who live their life herding as many of the nomads do in the area while also keeping eagles. There are many eagle hunters found throughout Bayan-Ölgii some genuine and some not so, only keeping eagles for the passing tourist groups. For thousands of years, the people of central Asia have practised Falconry out on the steppes.  As far back as the bronze age(c. 2500 BC) petroglyphs depict this ancient sport. The book The Secret History of the Mongols mentions of Genghis Khan obtaining an eagle for his father.  Marco polo also writes about attending large hunting expeditions with Kubilai Khan, where the use of eagles and falcons was common.

Durning, the communist times in Mongolia, eagle hunting, saw a rapid decline as collectivisation saw the local nomads pooled together on large farms. The sport of eagle hunting focuses on one man and his bird whereas during the Soviet period sport in Mongolia was to be a team exercise.

Since the early eighties, eagle hunting has seen a resurgence with many Kazakhs keen to begin hunting once more.

The most popular time to see the eagle hunting is in September and October when the Eagle hunters will partake in the yearly eagle festivals. Original there was one event that has now grown to two Altai Kazakh Eagle Festival and Sagsai Golden Eagle Festival. The festival regularly takes place in the village of Sagsai which occupies a valley of the same name. It is possible to stay with and visit the eagle hunters throughout the year although during the late spring and summer months it is rare for the captive eagles to fly.

The best time to visit the eagle hunters is during the Autumn winter period, although it is cold this will offer the best opportunity at seeing these magnificent birds fly.

Altai Tavan Bogd national park has some of the most beautiful scenery in all of Mongolia home to stunning snowcapped mountains, glaciers, lush valleys, and glacial lakes. The park is split into two zones, the Mountains in the northwest and the Lakes in the southeast. Altai Tavan Bogd National Park runs along the Chinese border and Russian borders for around to 200 km south following the Altai Mountains. The Altai mountain range crosses China, Russia, Mongolia and Kazakhstan with the glacial waters from this range filling many of the large lakes in the region as well as being the source of the Hovd River.

Altai Tavan Bogd is around 180 km from the regional capital Ölgii.

Most visitors will start in the city unless you are going with a tour operator. You will also require a permit which will need to be obtained in advance from the park offices in Ölgii. If you are travelling with a tour company, this will likely have been arranged for you. All that is required is a copy of the ID section of your passport. 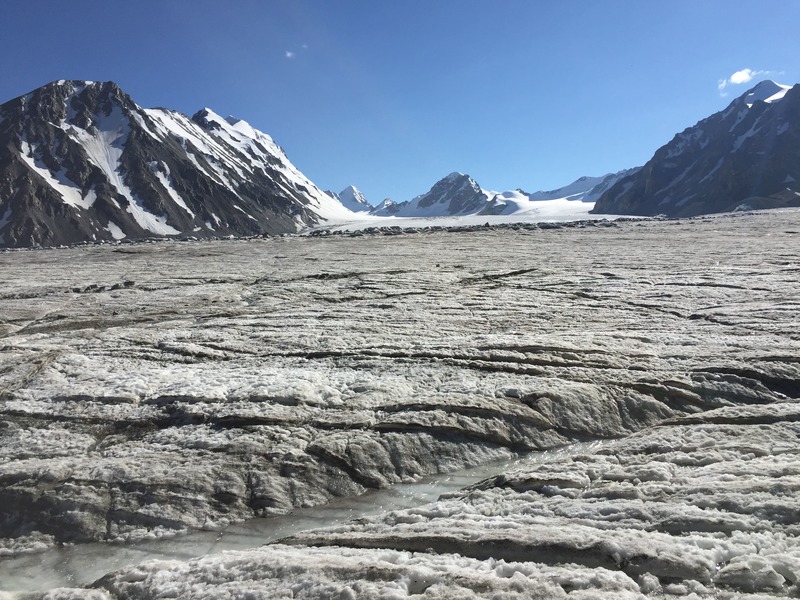 Tavan Bogd Mountain is located around 20 km west from the central ranger station. The mountains in this region are truly striking and remain snow-capped year-round. Below the mountain also lies the Potuniin Glacier  And the Tavan Bogd Base Camp which is perfect for exploring the area. There are not many local people living in this region although, around the central ranger station, one will find many Tuvan families whom traditional graze their herds here in the summer.

The Tavan Bogd Mountain area is best to visit in the summer camping here is a must with no Yurt/ Ger camps on offer.  The walk from the central ranger station will take around 6 hours.  Around the ranger station, the local families will help provide guides horses and pack animals if needed. If riding a horse, the journey will take around 3 hours.

The stunning lakes of Khoton Nuur and Khurgan Nuur are glacial lakes nestled against the Altai mountains. These lakes are worth visiting not only for their natural beauty but more. The area surrounding these lakes has many archaeological finds from Turkic Stone Men, petroglyphs, and large stone burial mounds dating back 3000 years BC. Living beside the lakes, you will also find many Kazakh nomads who chose to call this place home. Many of the locals here will have eagles as well as their herds and will any eager visitor partake in a small part of their life.

Travel to Khoton Nuur and Khurgan Nuur is challenging and will require a 4X4 the journey time from Ölgii city will depend on the seasonal weather conditions and can take 10 hours. Once at the lakes you will need to register at the ranger station this is found where the two lakes meet.

From Ölgii to the upper reaches of the river will take around 8 hours with stops. In many places, there are no roads or bridges. Most visitors to the park will go as part of an organised tour group or with a guide.

Due to its remote location, Ölgii City grew at a much slower pace than many other cities in Mongolia. With Russian help, buildings began to spring up from the 1950s onwards. As you travel, you will see some of Ölgii’s Soviet architecture set around the central square.

These days Ölgii has begun to grow, it now has a paved road linking it with the rest of the country and a small but regularly served airport.  New buildings have started to spring up in place of older Soviet blocks or vacant lots.

Ölgii city has a population of 35,000 and sits at an elevation of 1710 meters above sea level.

It’s centred around a city square with some Soviet architecture remaining but slowly disappearing.  Tourism brings in a substantial income for the region which has seen a growth in coffee shops, souvenir shops, guest houses and yurt camps. The city has paved roads, although once you leave there is only one taking you to Hovd and beyond this was only completed in 2019.

Winters are long-running from October to March with an average temperature of – 20.

Summers are of course shorter from mid-May to early September and an average temperature of 15-20.

What to see in Bayan-Ölgii

For many travelling in Bayan-Ölgii, the city of Ölgii will be the last civilisation you may see until the end of your tour. The Market in Ölgii gives you the chance to buy those last-minute essentials and more. If you want to see how local folk spend their time, then the market is for you as its always a hum of activity. Tucked away on the backstreets northeasterly from the city square, just look for the cargo containers along the street.

Russian army surplus such as jackets and thermal trousers if you have underestimated how chilly it gets at night. Towels and extra pillows and possible sporting goods to play with local families. For those souvenir hunters, you may also pick up some local Kazakh wares.

Do watch your valuables as pickpockets are known to operate in this area.

Another mothballed soviet style affair complete with staff that insists on following behind as you wander around. It does have the usual stuffed animals that have seen better days as well. That said it is well worth a visit as it covers the history and Geography of where you are visiting. It is spread amongst three floors and even has a full-size yurt inside to explain more about Kazakh life.  The section on the Soviet Union period is also excellent and gives a little more in-depth information.

Outside of the museum, you will also find some deer stones dating back to over 2000 BC. The museum shop is also of note as it had some exciting handicrafts upon the last visiting, some of which were cheaper than other locations.

1-2 minutes northeast from the square.

This colourful mosque was constructed in the early ’90s and was the first in the city since the ones destroyed in the Stalinist purges of the 1930s. There are now around six mosques in the city, and it is possible to hear the call to prayer at certain times.

When visiting, please do observe the customs removing shoes and wearing the appropriate clothing. Ladies should cover their heads with scarfs when entering as is the norm. It is an interesting mosque, especially if you’re interested in the religion of the area you are visiting.

5-10 minutes north from the Bayan-Ölgii museum cross the first main crossroads then take the next left.

This oft missed gem is easy to find not too far from the central square. It often holds concerts around Naadam, new year, Narouz and more recently the eagle festivals. The shows, of course, vary in style and quality but our recommendation is to visit as this is an excellent example of Russian architecture. At times when there is no show still, check it out the staircases inside are divine if architecture is for you.

Three minutes walk from the Southwest corner of the central square.

Ölgii is the capital and heart of Bayan-Ölgii province, so any traveller wanting to visit Bayan-Ölgii would likely begin at Ölgii.

The main road from Hovd to Bayan-Ölgii has been vastly improved in the past few years cutting the journey time to the capital Ulaanbaatar. The public bus station is close to the Bayan-Ölgii Theatre. Public buses from run to the dragon bus station in Ulaanbaatar and take 30-40 hours. Do expect delays and cancellations in the wintertime.

Ölgii has a small airport located around 20 mins from the city centre. This airport is probably the most convenient way to travel to Ölgii. There usually are two flights daily in the summer months; Hunnu air and Aero Mongolia are the two carriers that regularly fly into Ölgii.

The flight time can vary taking up to 4 hours at times as the flights may service other airports on the route. 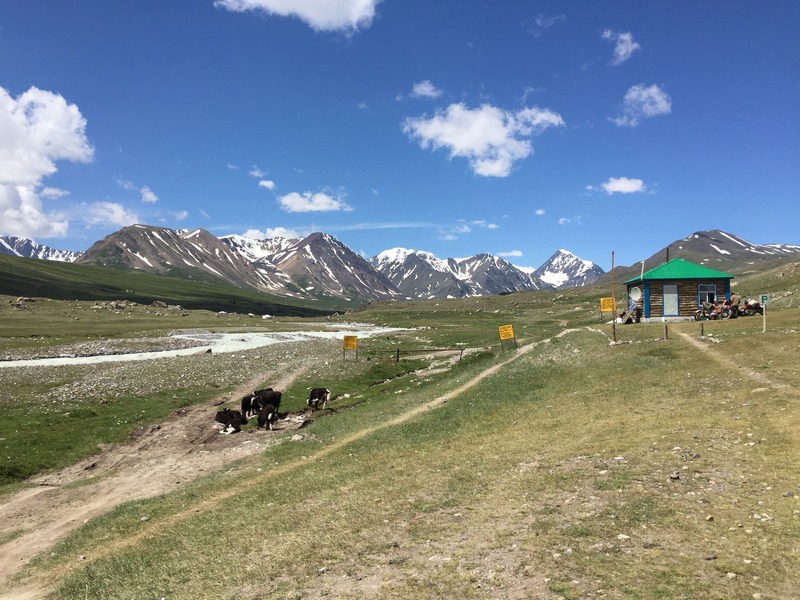