The Hissar Valley is considered the most fertile and densely populated region of the country.

It is hemmed in by mountain ranges on many sides,  said to have been inhabited for many thousands of years.

Note: Hissar can also be spelt as Hisar, Hisor or Hissor; we will use the Hissar spelling in this guide to keep it simple. 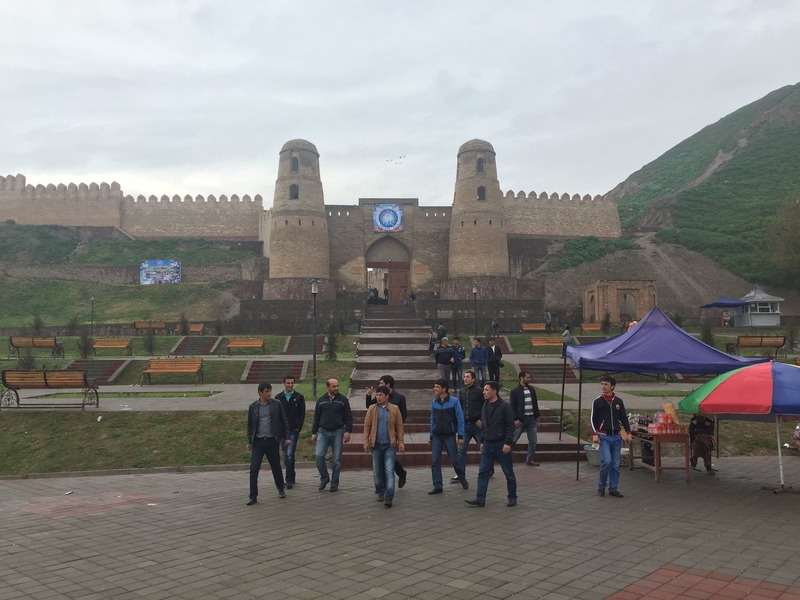 Hissar fortress is located 26 KM from Dushanbe and is best reached by shared minivans, and taxis run from Dushanbe's bus depot. A private taxi can be arranged and will cost around 15-20 USD.

The entrance fee is only around 1USD with extra for the guide at the Madrasa costing a little more.

Hissar city is located 15KM west from Dushanbe sitting at a comfortable 800meters above sea level has a growing population of 23,000 people.

The settlement of today is a lot newer than the fortress area dating from the Soviet period only making city status in 1993. For those passing through wanting to visit, the mosque is worth a stop as well as the bustling bazaar.

Hissar fortress stands atop its strategic hill overlooking the valley between two mountain ranges. The fort has been the site of habitation since the Stone Age, slowly passing through the hands of various dynasties and rulers. Hissar Fortress has the unfortunate monogram of being destroyed 21 times throughout history, this due to its strategic location.

As with many settlements across the region, Hissar was vital as it commanded a critical crossroads on the silk road, making a crucial staging post.

Originally Hissar was the capital of its independent khanate until the Emirate of Bukhara took it. It was to become the winter residence of the Governor of east Bukhara who commanded territory as far as the Chinese frontier.

The eastern Bukharan province ran pretty much to the present-day's Chinese border. In the late 19th and the early 20th centuries, the Hissar complex consisted of two madrasahs, more than a dozen mosques, four city gates, and a central market. All of this continued until the fortress was to make its final stand against the red army in 1924.

The siege was not to last long and it eventually it fell to the. A shadow of its former self what remained of this imposing landmark slowly fell into disrepair. Some of the stonework from the fortress was scavenged to be used by local farmers while other areas left derelict.

In the 1980s the fortress was to begin a new lease of life as historians and archaeologists began to take an interest.

Of late, the walls have once again begun to grow, offering a glimpse of how magnificent and magical this imposing structure would have been.

there is not just the fortress found on-site but some other wonderful archaeological gems and discoveries.

1. Hissar Fortress:  the iconic arched gate fortress area. This once housed the original gate constructed in the 16th century has now been completely restored.

2. Registan (the former market square in front of the fortress): No longer the site of weekly markets this once-bustling area is now a hive of activity at weekends with noisy wedding celebrations and kids on imported electric toy cars.

3. The Old Madrasah: This once educational building dates back to the 16th century. It is now a must-see area once again educating, as it has become the history museum. It costs extra, but we strongly recommend the local guide here.

4. The New Madrasah: As the name suggests, this newer building housed an Islamic education centre up until 1921.

5. Caravanserai: The brick guest house constructed in 1808; unfortunately, didn't survive intact to the present day. It can be found neighbouring the Old Madrasa and is worth a look. For its day with heated rooms double fired bricks it would have been a Shangrila of its time.

6. Chashmai Mokhiyon mosque: this mosque built in the 8th century. Unfortunately, didn't survive intact but has been restored to its former self. Its two verandahs and the minaret were the 15th-century additions.

7. Sangin mosque: The name Sangin means stone the primary construction material of early mosque. Scholars say that the original mosque was built in the 7th century.

8. The Mausoleum of Makhdumi Azam: dating from the 16th century; this Mausoleum built on the tomb of Khodzhi Muhammed Khaivoki's remained relatively intact.

On approach, you can see the mostly reconstructed fort from the main road.

It may have seen the rise and fall of many successive dynasties and itself gone through birth and rebirth, but now it is growing again. The stone walls are slowly rising from the forts worn foundations not to defend and repel but now to attract and draw. Hissar fortress now attracts local Tajiks and tourists to its ancient walls and museums.

A small funfair, restaurants horses by the minute and even kids rental cars, have now replaced Armour, stead and steel.

Note from the author: Be sure to time your visit during a public holiday or a weekend this is essential if you want to catch the area busy with locals.