The Mansudae Fountain Park is one of the first stops on most Pyongyang city tours. Visitors usually take a quick stroll around the park - full of schoolchildren playing in the artificial pools and waterfalls as well as wedding couples out for photographs in the warmer months, almost totally abandoned in the cold - before purchasing flower bouquets to present at the next, and much more impressive stop: the Mansudae Grand Monument, the huge bronze statues of the DPRK leadership.

Popular with painters, students doing homework, couples strolling together, as well as tourists!

Right bang in the middle of Pyongyang.

Just a few hundred metres from Kim Il Sung Square and walking distance from most of the central attractions of the area.

Pyongyang Department Store Number 1 is just a one minute walk away. 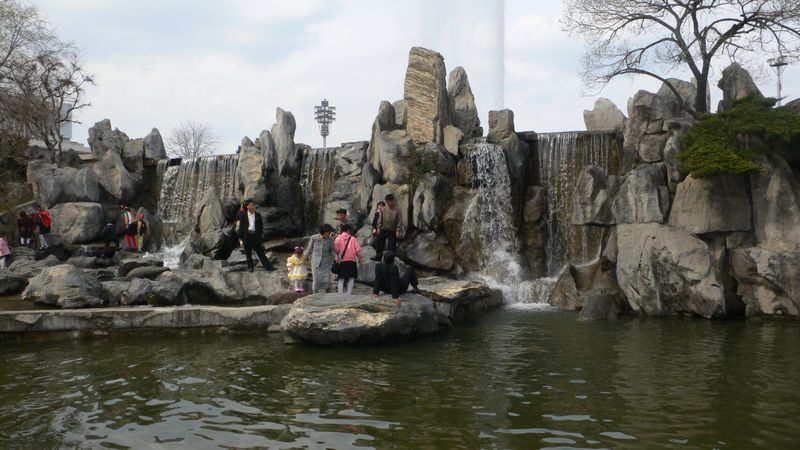 While the Mansudae Fountain Park itself may be mostly concrete, and with the fountains only operational in spring and summer, there are some interesting sites in and around the park, read on for more!

Just across the road from the fountain park, nestled among a grove of trees, are Sungin Hall (1325) and Sungryong Hall (1429; rebuilt 18th century), dating back to the Koryo and Ri Dynasties, respectively. These buildings are among the oldest in Pyongyang and were traditionally used to hold ancestral ceremonies for King Tangun, founder of Old Choson, and King Tongmyong, the founder of the Koguryo Kingdom.

The two halls provide contrasting examples of simple Koryo architecture and the more ornate designs of the following Ri Dynasty. Both are rarely visited by foreign travellers.

To the southwest of Mansudae Fountain Park one can catch a glimpse of Kim Il Sung Square, first opened in 1954, lined with government ministries dating back to the same era. The design of these ministries, as well as much of the residential and commercial buildings in Pyongyang's Central District, took their inspiration from the Soviet Union.

Typical Soviet motifs of harvest and industry adorn building facades and decorative columns. The building of this era have high-ceilings, giving a pleasant open feeling, but are also inefficient to heat in winter. For this reason, one can see ongoing construction around the Kim Il Sung Square area as older buildings are renovated or replaced.

On the small hill to the northeast of the fountain park, is the Pyongyang Schoolchildren's Palace. Opened in 1963, this centre of extracurricular activities in the arts, sciences, and sports was built on the former site of a colonial-era grade school and is referred to as a 'palace' according to the aphorism of President Kim Il Sung that "Children are the kings of the country".

The Pyongyang Schoolchildren's Palace dominated the Pyongyang skyline for over a decade until a wave of construction in the late 1970s and early 1980s. There is a second, larger and more modern, schoolchildren's palace in West Pyongyang's Mangyongdae District.

The Mansudae Art Theatre lies directly to the west of the fountain park. Built on the site of an old factory and opened in 1976, the theatre was designed as a modern facility incorporating both socialist and traditional Korean design. The fountain park was originally built as an extension to the theatre grounds, but the growth of trees over the past decades has broken the original continuity. 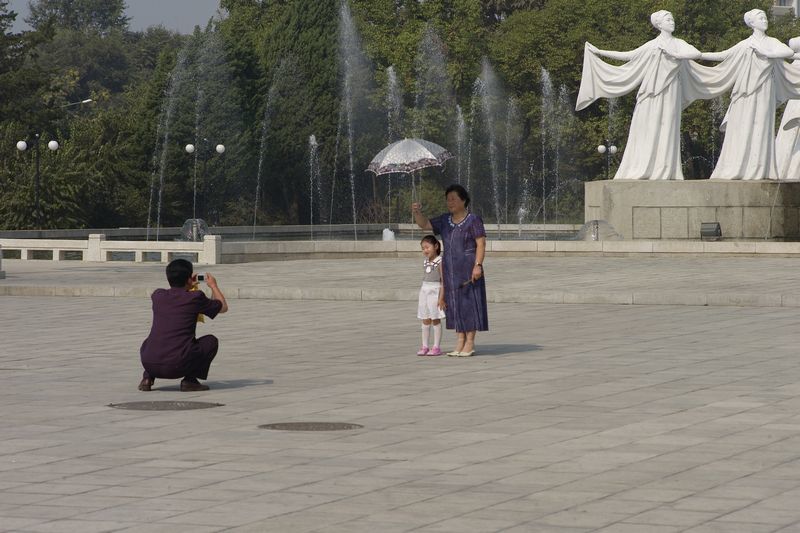 The large white sculpture of women dancers in the middle of the park depicts our song for this week: Snow Falls, a song first performed in the neighbouring theatre. You can listen to the 1970's vinyl version at the Yanggak Island Discs Sound Cloud and watch a video of the performance here

South of the fountain park is the Grand People's Study House which overlooks Kim Il Sung Square and serves as Korea's national library, a correspondence / continuing education college, and a research centre. This massive neo-traditional building was opened in 1982.

So it’s not just a load of concrete and some water – here in the Mansudae Fountain Park you can get a quick orientation tour of central Pyongyang – ideal start to a tour of the city! 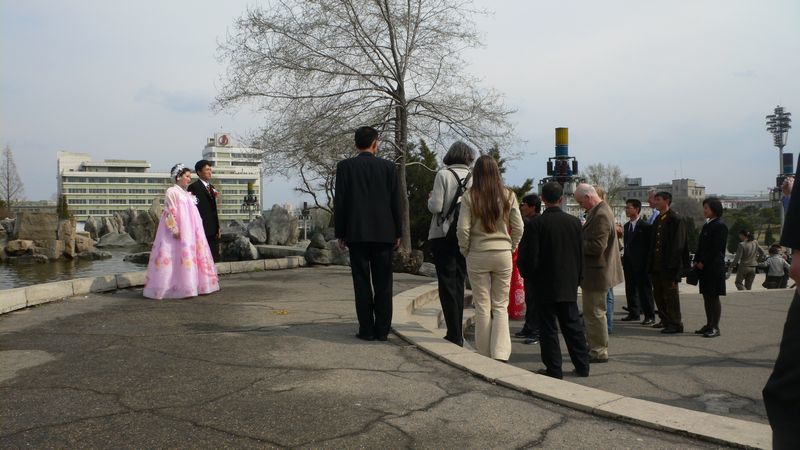