Truly one of the most amazing places the interested and engaged world traveller can possibly visit, this remote and supremely dark place is deep in the steppe of Kazakhstan to the south-west of the semi-abandoned town of Kurchatov, where the bomb itself was designed, refined, and tested.

‘Polygon’ as a Russian language term just implies a place, so this Nuclear Polygon is the area where tests took place, 456 such tests took place, with weapons of various design, model, lethality, and blast radius.

Atmospheric tests (meaning above ground, since banned by international treaty), and underground tests, test using animals and machinery as subjects all took place here. Tests even more sinister than that are rumoured too. 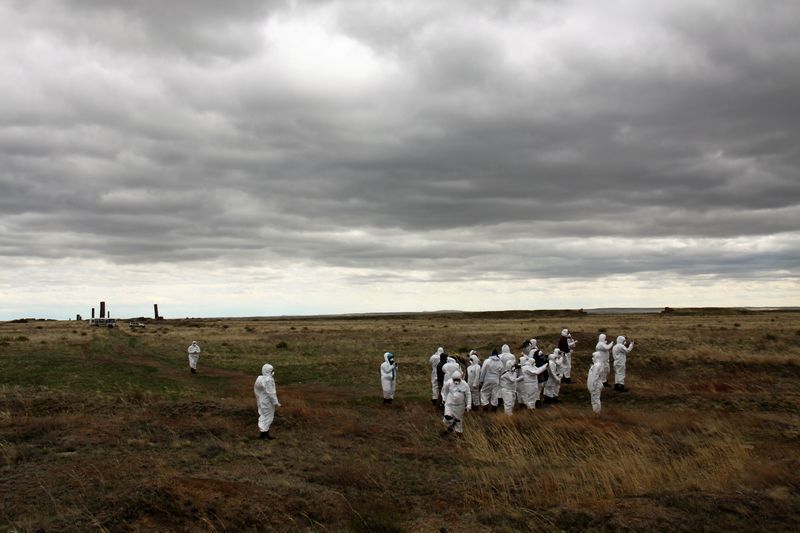 Semipalatinsk Nuclear Test Site is only legally accessible from Kurchatov and as a guest of the Institute there.

Start point and finish point will be in Kurchatov and the visits outlined above are best done over two days; first to Opytnoe Pole, then the next day to the Atomic Lake. Distances are long and the road is tough, but this is where Atomic Weapons were used, so expecting an autobahn would be too much. Prepare yourself both for a rugged journey and also for one of the most life-changing experiences you can have! 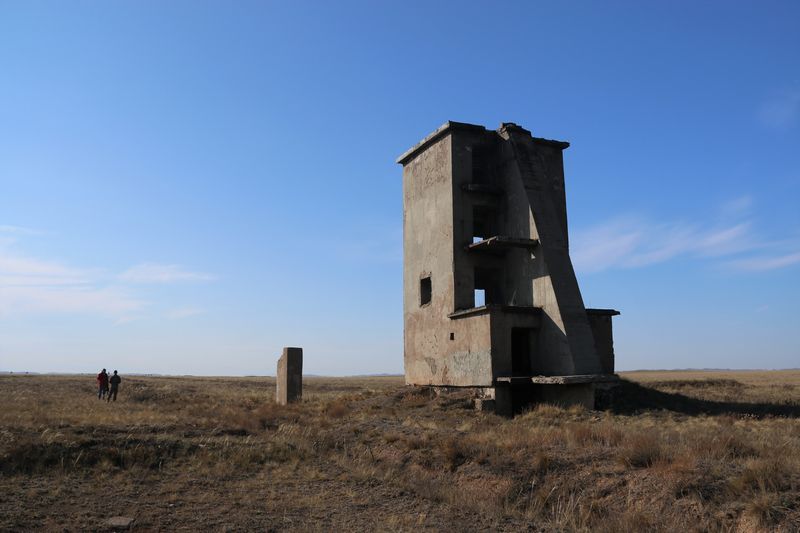 The first Soviet nuclear weapon, RDS-1 (given the cool code name ‘First Lightning”) was a 22 kiloton bomb dropped from a tower here on 29th August 1949. This is the bomb that you will see models of at the Test Site Museum in Kurchatov. RDS-37 was the USSR’s first Hydrogen Bomb, a weapon of a degree of lethality more advanced than the ‘normal’ atom bomb, which was tested in 1955.

In the early 60s tests moved underground; tunnels and mines were dug, and then destroyed in a blaze of unimaginable energy. These tests were both military and civilian in nature, the latter meaning they tested the viability of using nuclear explosions for industrial purposes. The famous Atomic Lake (see below) was created by one of these tests.

Due to leakages of hazardous radioactive material (that still blight this area today, much has been written about the poisonous legacy of these tests in this part of Kazakhstan) as well as the increasing yield of the blasts themselves, testing was moved from here eventually to even more remote places such as Novaya Zemlya in the Arctic Ocean, where the Tsar Bomba was dropped, the largest man-made explosion ever to have taken place.

The nuclear activity that happens in this Polygon now is all research-based, with a test reactor on-site for local scientists. Also, research into the ongoing legacy of the weapons used here in the past goes on, as well as clean-up, decontamination, and efforts to secure any dangerous radioactive sites from any would-be villains who might be interested in getting their hands on this nasty stuff.

As a result of all this, the Polygon is a secure area and permission is needed to enter. The reality though is that it is a huge area in a rather run-down part of the country, where folks can enter from just about anywhere in a 4x4, as a result over the years much looting has taken place (as many of the sites inside the zone were made of high-grade metals) and people even enter for fishing in the Atomic Lake (it isn’t all 3-eyed fish, and the water itself at the top is fine, it is the dust on the shore which is washed up from the bottom of the very deep lake, exactly where the fishermen sit, which is radioactive. They resort to the traditional Russian vaccine though; vodka. Oh dear)

A visit to this place involves a lot of dates, figures, science, and pointing at stuff. The best way to experience it is to see for yourself of course but here we will go through what the process involves roughly and what kind of things you may see when you venture into the Semipalatinsk Nuclear Test Site; the Polygon. 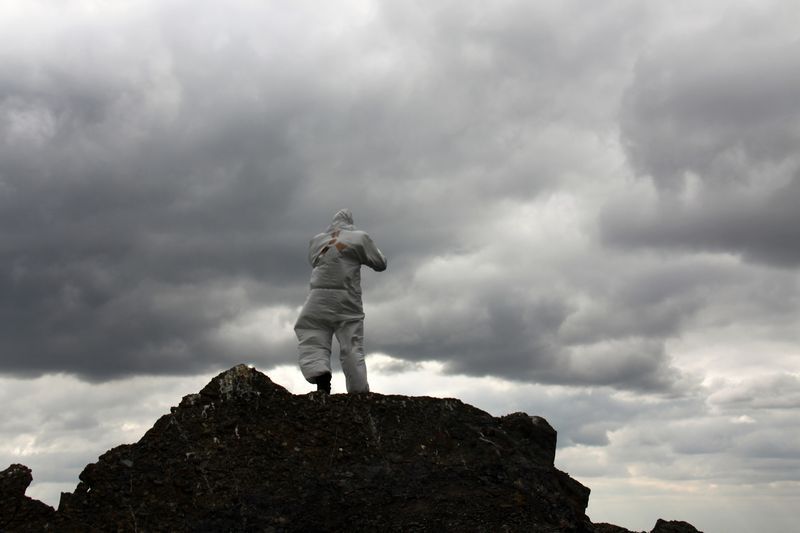 Journey to the Epicentre:

To get into the Polygon first you will have picked up guides (also scientists, they really know their stuff) from the Museum of the Test Site. Then, in their rickety-but-functional bus, you head off down dirt paths into the zone itself.

They will provide all the protective gear needed for visits to the key spots (white suits, facemasks, gloves, shoe covers) and you might think to bring a sharpie if you want to personalize your outfit and be identifiable to anyone if you are in a group (see this clip from the amazing Hot Fuzz for a demonstration of what happens when everyone is dressed in this gear), you will be told when to change into these suits so don’t worry about it at first.

The drive is quite a long and bumpy one, taking around 90 mins once you make a couple of stops. As you will have seen in the museum the original epicentre was built with lines of concrete structures emanating out, kitted out with high-spec ultra-fast cameras capturing thousands of frames per second, also bridges were built, pens for animals, areas set aside for vehicles, all to see how much damage is done y the bomb and how far the devastation reaches.

As you get closer to the centre the structures begin to show signs of damage, eventually, they are not standing any more, and then completely blown away, testament to the destructive forces here.

You can get out of the bus for photo opportunities, exploration, climb inside the structures that still stand. It is a chilling experience to be still quite some distance from the place where the detonation happened and inside a re-enforced concrete tower that has been partly melted by the energy unleashed decades ago. 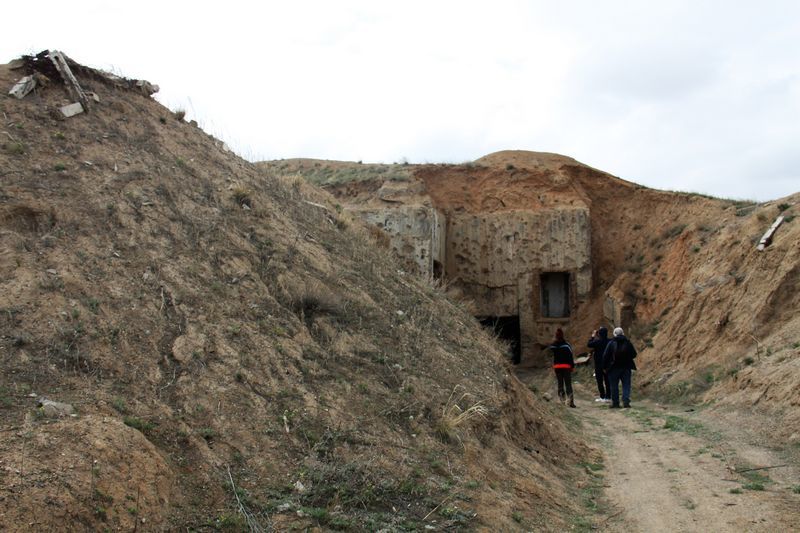 This is the epicentre, the ‘Experimental Field’, the exact spot where the bomb detonated is simply an overgrown pond now, birds flit around, a bit of metal (remnants of the tower from where it was dropped) sticks out, and it all looks pretty….idyllic. A nice place for a picnic, maybe a dip….maybe not.

Here you need to be in protective gear. Guides will have dosimeters and Geiger counters, they can show you local hotspots but frankly the level of radiation is not overly harsh here, the suits are mainly to stop you picking up any remnant of radioactive dust, which still blows around here a bit. Staying a short time will have no effects on a visitor, the suits are not just for show, but this isn’t like walking into a live reactor.

From here you can see the lines of concrete structures disappear into the horizon. Someone will point out the road bridge (the actual bridge being destroyed, the two ends of, the ramps, still visible and intact), and you can wander around for photos and to have a closer look. It is genuinely chilling and sends shivers up the spine, an incredible and unforgettable place indeed. 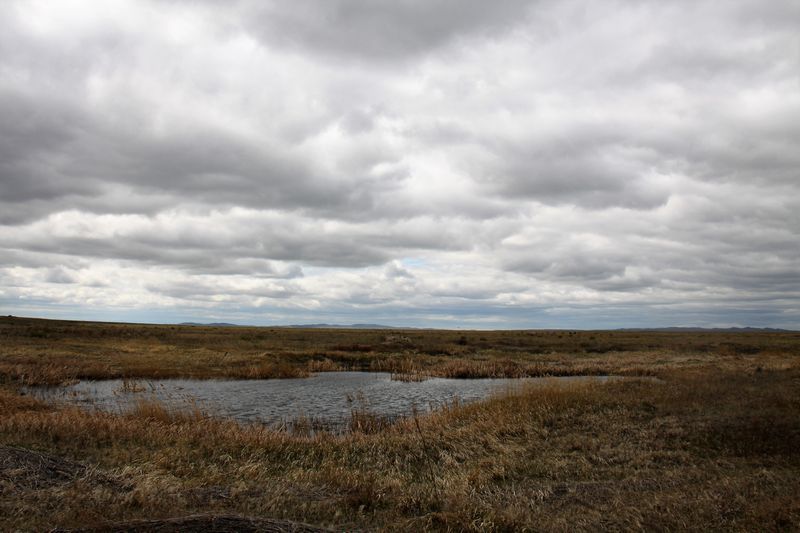 Best done as a separate trip due to the time it takes, this is also deep within the Polygon. A long drive of around 3 hours from Kurchatov, again in the bus belonging to the Institute and again carrying the same protective gear (new ones of course, these don’t get re-used). Along the dirt paths guides can point out some of the concrete sealed spots where the IAEA assisted the Kazakh government in securing areas that stored hazardous material, also various small and large bases along the way can be stopped at, a Roadside Picnic can be had too.

Atomic Lake itself - officially called Lake Chagan or Lake Balapan, although nobody calls it anything other than Atomic Lake - was created deliberately. On January 15th 1965 a 140 kiloton device was detonated deep underground after many months of digging and preparation.

This ground was flat at that time, now there is a steep caldera rising up to 38m around the lake, all the result of a few bits of metal and uranium deep underground.

Atomic Lake is more than 100m deep and up to 400m across. The water here flowed in from the Chagan river, which can be seen from the crater itself, the idea was to test the ability of atomic blasts to create irrigation systems. It worked a treat…apart from the deadly contaminants released. Maybe once that all dies down, in however may tens of thousands of years, it can turn this area into a fertile paradise!

Fish live in the lake, as they don’t swim to the depths where the radioactive dust has settled they are actually healthy. Still, eating these might be a step too far for most people, not for the occasional daredevil who comes in for a spot of illegal fishing though and you can find these guys at the lake in groups from time to time. They literally fish from the most dangerous part of the lake, don’t waste your time trying to reason with them.

Atomic Lake is a very long and uncomfortable drive from Kurchatov, it is a full-day round trip, but it is something very unique, awe-inspiring, educational, and stunning. Well worth the time even if you will ache and be bounded around for hours to get there and back. Highly recommended, indeed a must-visit spot for anyone who had made it to Kurchatov at all, you won't regret it! 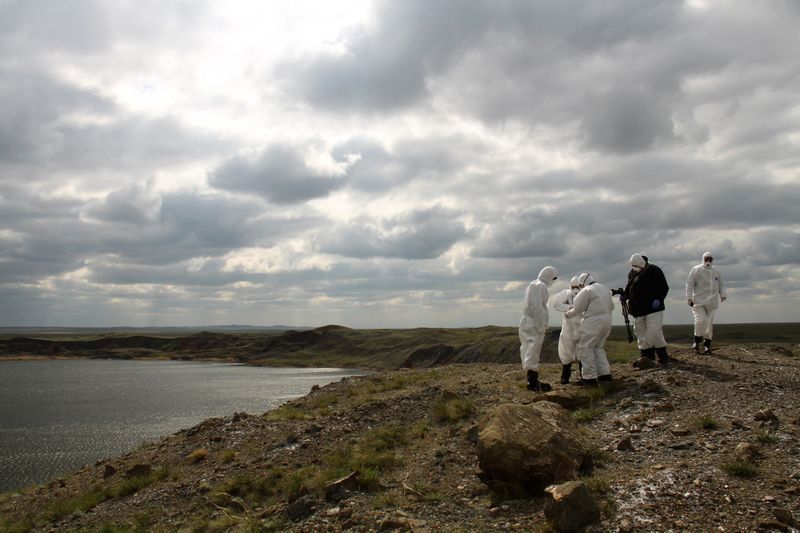 Although it is officially off-limits there is a spot known as Metro Station in which a model of a generic underground station was built to see how well it could withstand being in the area of a nuclear blast. This is not very deep underground, just a few metres below the surface, but it is identifiably a metro station and if your guide is willing/able to take you then it is a very interesting side trip of just a few minutes from the main path through the Polygon

Video of the 1953 first Hydrogen Bomb test, with a yield of 400 kilotons, carried out in the Polygon can be seen here. This was also the first time an H Bomb was dropped from a plane. The countdown machine shown about 30 seconds into the clip is in the test centre museum and staff can turn it on for the ominous countdown to be experienced

Video of the first two-stage Hydrogen Bomb test, in 1955, can be seen here. There is a story shown here that this one had a higher yield than expected and caused damage even in Kurchatov town, causing a building collapse, killing a young girl, and burying a group of soldiers in a trench. The clip also shows some of the buildings erected for the purposes of the test being blown away like matchsticks. 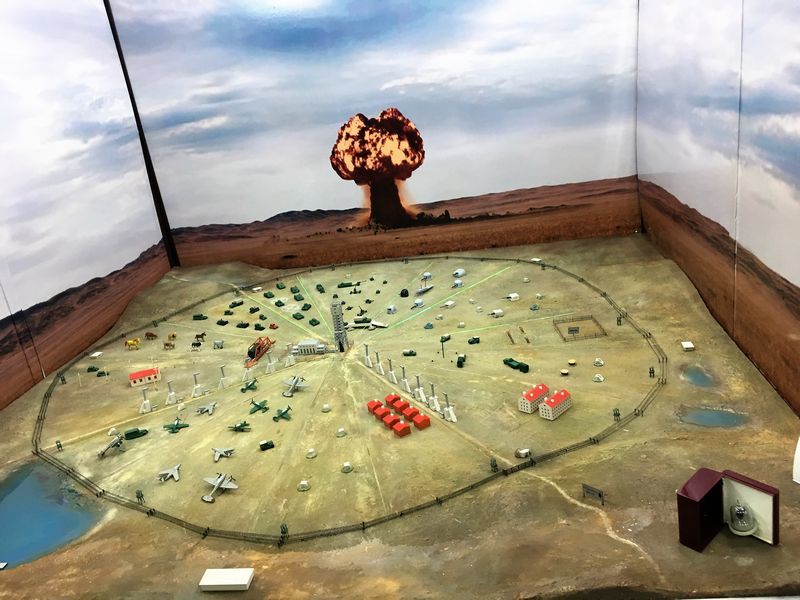