Situated on the Caspian Sea coast and home to the major port of Turkmenistan, Turkmenbashi city is a place very much worth visiting for anyone interested in the junction of late-Imperial Russian, modern, and future history (thanks to its proximity to the bizarre Awaza Resort area).

Formerly known as Krasnavodsk (Russian for Red Water, so named due to the reflection of the cliffs in the sea)

The city was initially built (over older habitations) by the Imperial Russian militar.

At the time, the military were advancing into the transcaspian to conquer, bring the railroad, and battle the British in the proto-Cold War known as the Great Game

Modern Turkmenbashi City is a sleepy town, with an air of the Mediterranean if mass tourism and low-cost flights had never been invented.

It is a place seemingly under-designed, which is rare in Turkmenistan.

A smattering of marble buildings, mostly though the near-ubiquitous soviet-era low apartment buildings dominate the city.

A steep hill bisects the two sides of the city meaning a walking tour either has to go around it (more pleasant) and over it (more grueling).

The waterfront, which should be the highlight, is dominated by closed-off areas (such as for the Presidential Yacht) or abandoned ships and a decaying funfair.

If you walk further down the coast flat beaches can be found – this isn’t a good area for swimming, surfing, or sunbathing though, mostly dog walkers and lost tourists find themselves here!

Despite all this seeming negativity there is much to enjoy in Turkmenbashi;

The bazaar is lively, the cafes are pleasantly located, the city is walkable for sure, and there is a good variety of things to see and do here too.

Coastal life in central Asia is not common so come and experience a little in this semi-charming town! 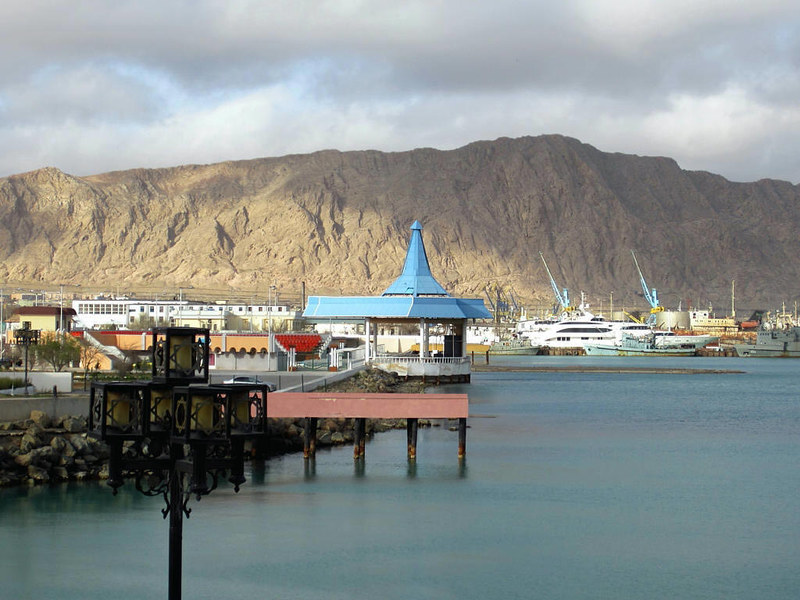 What to do in Turkmenbashi

More than in most regional cities actually. These would be our highlights;

Japanese Cemetery – if you enter or exit by plane, via the amazing new airport, you will pass this small spot, be sure to make a stop to be reminded of some tragic history.

As the USSR entered WWII late in the day in the far east there was limited action against the Japanese, however some POWs were taken and many of them were transported to the interior of the Soviet Union and put to work.

Much of the mid 20th Century centre of Turkmenbashi was built by these men, forced into a form of slave labour.

The central large-stone buildings were by them, the cut through road that makes its way from the airport plateau past the enormous gas refinery was also dug by them.

Many of them died and were buried at the edge of a local cemetery just outside the city.

Here a monument can be seen, erected by the Japanese Government in their memory, it is simple and basic, but worth a stop for sure.

Oil Workers Cultural Palace – one of the buildings erected by the Japanese POWs, this is effectively the centre of the city.

A faded gold-painted statue of the Turkmenbashi himself in a chair sits here and while the building is usually closed you might be in luck and be able to see a music or cultural show (or wedding) inside.

At least see the outside of the building.

Regional History Museum – not amazing but worth a look inside if you have an interest in dodgy taxidermy, photos of the development of the city, maps and models of how nearby Awaza has been developed and what hopes are made for the future.

The museum can be found next to a sign celebrating the centenary of the foundation of the city of Krasnavodsk in 1969.

If you ask the curator there to explain the history of the building they will tell you a great story about how this was the courthouse used to imprison the 26 Baku Commissars before their execution.

This story is one that was once universally known in the USSR and used as a prime example (including by Trotsky himself) as to the perfidy of the British who are said to have carried out the arrest and murder of these heroes.

Gates to the East and West – near the railway station there are two run-down arches supposed to be in the Eastern and Western Style (hmmm, maybe from a certain angle) pointing the way to Europe; across the Caspian, and Asia: across the Steppe.

This is hardly the Hellespont but it is a good way to get a photo to show you stood in the middle of the world!

Cheryomushki Bazaar – well worth a couple of hours of anyone’s time, just for looking if not for actual shopping.

The stall holders are friendlier than in most of Turkmenistan, the stuff or sale mostly the same imported rubbish you can find anywhere but they also have a fish section, which may be fragrant but is also fascinating.

The Caspian Sea is the source of Caviar of course so if you want this it can be found for very reasonable prices (considering the absurd rates of the market for these fish eggs), although anything you buy will be marked as ‘Product of Azerbaijan’ for a slightly dodgy reason (your guide can explain on the spot, lets not incriminate anyone here!)

Hit the cafes by the water and on the hill separating the town’s two parts, watch people go by, eat some baklava, it’s a sleepy town so act sleepy for a bit! 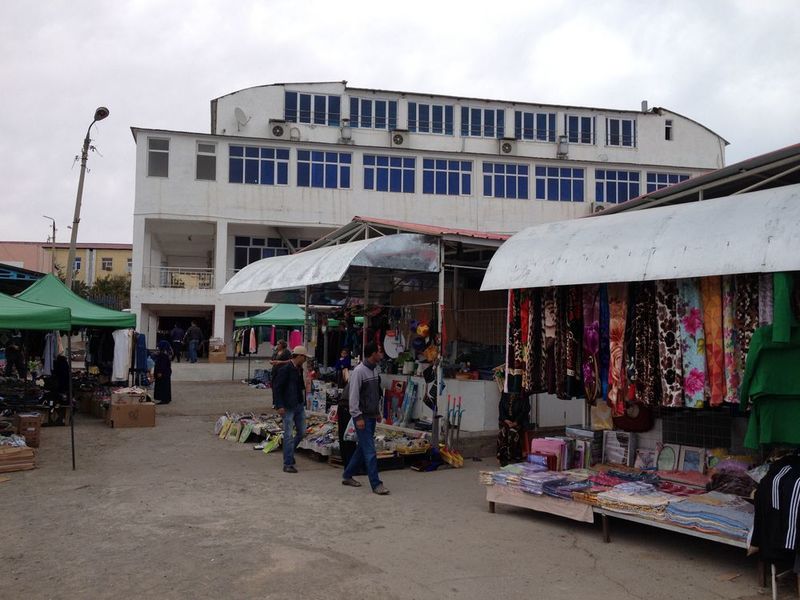 There are two late-Turkmenbashi (the person, this can get complicated!) era hotels in the city itself.

The Hotel Turkmenbashi, which is central but next to a main road, and a bit of a trek from the town.

This is where you would stay if you wanted to be in Awaza but all the hotels there were full (which has literally never happened).

Otherwise there is the Charclac (Seagull) Hotel, which is more central, has a better sea view, disco on weekends

(watch out though; some of the ladies there work for a living, you’re not that charming!)

It's the best option if wanting to stay in Turkmenbashi.

Frankly though you should be staying in Awaza if you are visiting this city, that is a much better option unless you are there for several days (for example if stuck waiting for a ferry, see below!)

From Ashgabat it is a 6 or 7 hour drive, so either take the train (overnight, cheap but a bit of a drag actually and hard to get tickets), or fly to the shiny and fancy but underused Turkmenbashi airport.

The other way to enter/exit Turkmenbashi City is by ferry, mainly to Baku in Azerbaijan, across the Caspian Sea.

This is an exciting and interesting way to go and is recommended but with serious caveats and provisos.

Firstly, note that the ferry is not a cruise ship, it is mostly for cargo and vehicles, so there isn’t much to do on board.

Next note that the official schedule is very much aspirational, you could find yourself waiting days for this to happen, so have a visa issued to cover you for any downtime you have to wait.

It is amazing though and the views from the deck of the oil rigs in the sea at night are both haunting and inspiring, give it a try if you have patience, time, and don’t mind having to pay a little baksheesh to get a decent room onboard!

Pro tip: take enough food with you, the restaurant on this boat may be open sporadically, or not at all. 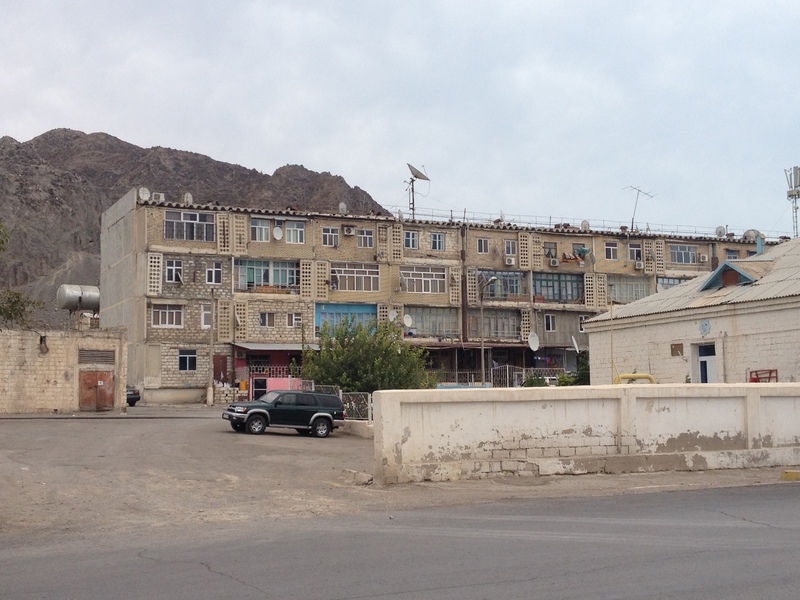